It has been a LONG summer without access to a CNC mill, I need something that can turn my CAD into parts with the power of robots. CNC mills are expensive and heavy, so I settled for the next best thing: a 3D printer.

I found what looks like the cheapest viable printer: the Ender 3. I bought it for just over $200 and it can print PLA and ABS out of the box. The frame is all-metal so it is pretty rigid and since it ships as a kit everything is pretty modular and easy to change.

As soon as it arrived I set it up following their guide and started printing some PLA.

I played around with the temperature, feed rate, and acceleration and ended in a good spot for PLA; the benchy didn't look too bad and I can do small parts in 2-3 hours.

Manually leveling the bed takes a long time and the stock adjustment springs aren't strong enough so the leveling knobs move from vibration and the bed only stays level for a few prints. I found that by moving the Z limit switch down the new Z0 position compresses the springs more, which puts more friction on the knobs and prevents them from rotating.

The extruder has a temperature limit of 260C and the bed has a limit of 125C so I can't print anything that takes too high of a temperature. The extruder temperature limit is low because there is a PTFE tube in the hotend heat break and even running it at 260 for an extended period sears it. I want to be able to print some more exotic materials like nylon and polycarbonate in the future so the hotend is going to be upgrded.

The bowden extruder also ended up causing some minor issues with stringing and the high retract distance slowed down printing times. PLA and ABS weren't too bad but I tried printing some TPU and that created full walls out of strings.

I found a thingiverse model of a prusa print head that was modified to mount onto an ender 3. This combines an e3d all metal hotend with bondtech gears and a stepper for direct drive. It also has a bltouch probe mount so I was sold. All I had to do was buy a $15 extruder, $10 bondtech knockoff gears, and a $20 bltouch kit.

Here are all of the parts needed after I printed them: 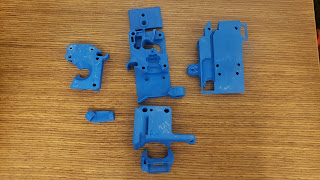 The knockoff e3d hotend I bought was taller than the original, so I had to modify the STL files and cut away a big cylinder where the tall fitting intersected.

I also changed a few hole locations and diameters because I wanted to use some spare plastite screws from BDE to assemble the entire thing.

Here is the finished hotend: 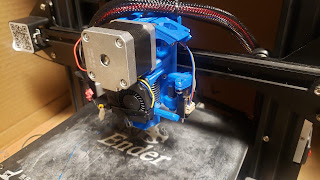 I ordered a roll of nylon filament that I will try printing with when it arrives. With these modifications I am hoping for some good results. 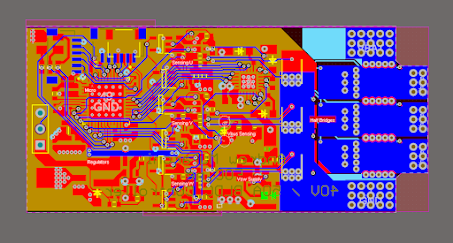 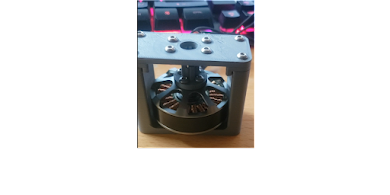